Working towards the demo

As we're closing in on the target date for our full demo, we're hard at work animating, sprucing up the combat system, and squashing bugs, among hundreds of other things. With that in mind we will probably not be posting updates on this blog as often, however you can definitely expect one or two more before the demo. We'll primarily be focusing our social media efforts to our Twitter (@PseudoZap), so be sure to follow us there. In addition, if you are interested in interacting directly with us, please feel free to join our discord (discord.gg/vfk49gG).

Lastly, check out this video below which we recorded of our most recent expo demo that attendees at PlayNYC 2019 had a chance to play. If you're interested in getting a chance to play our expo demo before the full demo is released, and you live in the NYC area, come attend one of Playcrafting's local events (https://playcrafting.com/events/).

One thing you'll notice after watching this video is that we're finishing up implementing the new art style. Let us know what you think! And again, stay in touch!

We want special abilities to be a central part of Scrap Bringer combat. In between punches you'll have a wide variety projectiles, AOE attacks, status debuffers, and other effects at your disposal. However we will also limit you to three abilities at a time, making choosing your load-out a large part of the game. We're also approaching skills for this game with three unique skill "trees": 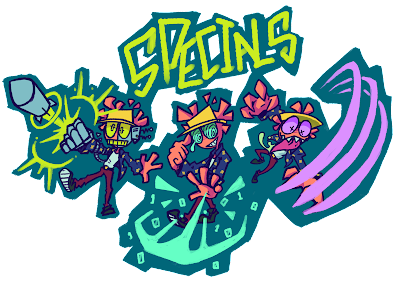 For the Playcrafting Winter Expo we added three skills into our convention demo, one from each of these skill trees. Check out the descriptions and short clips below:

Missile is fairly generic at the moment. You shoot a projectile that does a high amount of damage to the enemy it hits, creating an explosion that does moderate damage knocks enemies back.


Force push sends out a large wave of energy, doing moderate damage and pushing enemies back. Currently it has a low cooldown, allowing you to cast it in rapid succession.


Claws makes your basic punch attack faster and gives it a larger radius, allowing you to mow down groups of enemies quickly. It also makes you look stylishly purple.

We know these names as the stand are certainly unimaginative, but they're simply placeholders as we develop the special ability system in more depth. Ultimately we want these special abilities deeply embedded within the lore of the world. We also plan on having multiple upgrades to each special ability, which modify them in unique ways. We'll show these upgrades off as soon as they're ready.

If you have comments or ideas that you'd like to share with us, we're be very eager to listen! Thanks for reading!
at May 24, 2019 No comments:

We'll be presenting our latest version of the Scrap Bringer convention demo at the Playcrafting NYC Winter Expo this upcoming weekend! This version has slight modifications / bug fixes, and finally includes special abilities!

Also a quick update on the development of Scrap Bringer. For the most part we've been on hiatus since PlayNYC 2018. This time allowed Konrad, our lead artist, to develop his art style to a point where he felt it was truly ready for the game. Take a look at the updated version of Scrappy below and let us know what you think! We'll also be showing off a lot of the new artwork at the Winter Expo this Saturday.

As development kicks into gear we plan on posting a lot more updates so stay tuned! 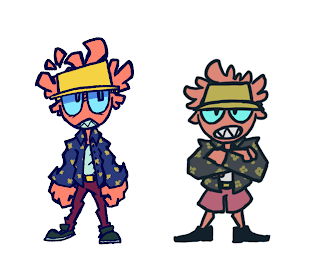 Play NYC was a an amazing experience for us. It was the very first time that we were able to show off Scrap Bringer to the public and have other people play. We learned a ton about what things we're doing right and what we need to do differently, and figured we'd share those findings with you. First off however we'd like to thank everyone who managed the chance to play our convention demo - the overall positive response we received has inspired us to work even harder towards our goal of releasing a full demo. Also we would like to thank Dan Butchko and everyone else responsible for organizing Play NYC and helping to bring more indie games to the NYC area.

Right away the most important lesson we learned is how much of a time crunch a deadline such as a game convention could be. Initially we planned for this demo to include 3-4 different types of enemies (not including the boss), special abilities, punch combos, and the ability to throw items (such as trashcans) at enemies. However with time running low we decided to scrap all of these concepts and instead focus on polishing the base that we already had. That resulted in the final demo only featuring basic punching, dodging, healing, and one enemy type (the zombies). A big focus for us was making sure that the world looked visually appealing, and so a lot of effort when into small details such as the buildings, streets, cars, and other world features.


Switching gears, an area where we feel can definitely be improved is the controls. Certain people did not enjoy the right-trigger as a punching button, and so we will be investigating the best option for this going forward. Another point was that the analog sticks favored the diagonal directions too heavily, and so we actually made changes to these values after day 1 of the convention to correct this, and will continue to look at it in the future. Overall some people also noticed that some of the animations are a bit clunky and/or lacking, and we completely agree. Due to the time crunch, things such as rolling and healing animations did not make the cut, but we plan to include them in the future. We are also considering re-hauling the punching system, perhaps making it fully 360 degrees.

In the end one area that we decided to focus on before the convention in particular was the boss fight, something which we feel paid off as many people have praised his design, both visually and mechanically. The difficulty level kept people playing the demo repeatedly, however after watching the majority of people struggle against him we will most likely adjust some of his values. We think that his "yellow" mode is a bit too unforgiving as it stands, with him swinging almost nonstop if close enough to the player. We also plan to add more to this fight in general, for example a 2nd phase with unique fight mechanics.

With all of this in mind, we are going forward working on the full demo with the confidence that people will be willing to play our game once it is released. We'll continue to catalog the decisions that we make in this blog and also on our Twitter accounts, so be sure to keep following us and don't hesitate to reach out with questions or comments. We are always happy to receive feedback and improve from it. Finally to end, here is a photo of the PseudoZap team with the banner we made specifically for PlayNYC. 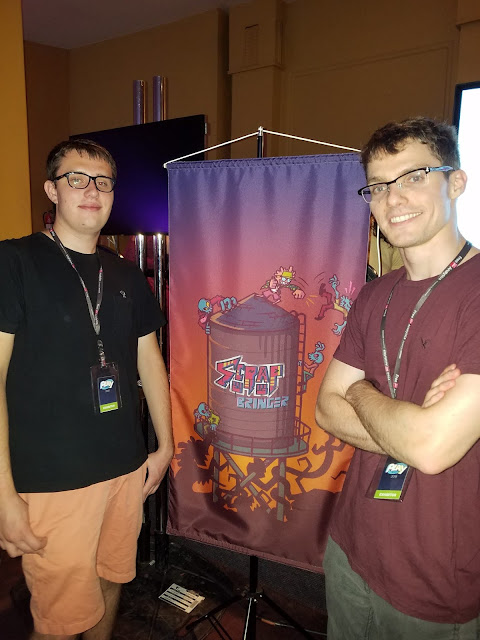 PseudoZap will be presenting Scrap Bringer at NYC's premier game convention - PlayNYC. Come join us on August 11-12 for the opportunity to play our exclusive exhibition demo. We'll both be standing by eager to hear your thoughts and feedback. 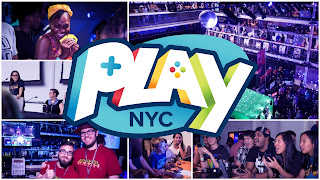 To say that we're working hard to have this demo finished and the highest quality possible is an understatement. For this reason we will not be updating this blog until after the convention. Follow us on Twitter for any updates in the meantime, and for live updates during the event!

This guy we both had a lot of fun thinking up. With our urban theme we're taking a lot of inspiration from everyday items that you find in a city, and streetlights presented an opportunity for a very interesting fight mechanic. You find him at red standing still, and if you get too close his mace turns green and he sprint towards you with a rush of quick and viscous strikes. After some time however the light turns yellow and he slows down, using much more powerful yet telegraphed moves. At red he stops completely, giving you a brief opening to catch your breath before the cycle repeats. To make this fight more unpredictable we also throw in random red lights to throw off his timings and to keep you on your toes.

We want this to be one of the more memorable / challenging enemies that you encounter in our city, someone that you would want to stay clear of if you were low on energy or supplies. Big inspirations for this character were Pyramid Head from Silent Hill and the knights from Dark Souls. Perhaps  you can see them in the concept art below.

The name "Dead End" was suggested by Twitter user @xxbombcreeper. However perhaps you can think of a cool name as well? Either way, let us know what you think of the design!

We felt that zombies would be a great fit for our apocalyptic-city setting, but not as people brought back from the dead. Rather they are citizens who were either infected with some sort of virus, or who fell victim to the side-effects of rapid mutation. They roam the streets in seemingly mindless packs...  until they find prey to fixate upon. It does not look like they actually hunt to eat either, but rather just attack for fun.

This particular design is of an "ultra-zombo". They are characterized by their massive arm which they use to rapidly move around and grab the player with, restricting their movement. This is in contrast to their smaller, normal-armed cousins, who instead sport the ability to leap at you.

The name "Zombo" arose as a working name that sort of stuck in an endearing manner. But if you can think of something better we're all ears. Let us know what you think of the design and what the name should be in the comments!
at June 08, 2018 No comments: